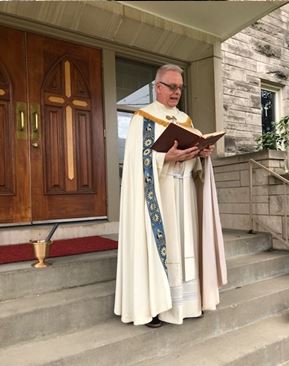 “What are you Seeking?”

The very first time the person of Jesus appears in the Gospel of John, He invites two disciples of the Baptist to “come and see.” The remainder of the Gospel follows those three words. Jesus will be flashing signs inviting a faith-statement from those who could see. Seeing becomes a most important response to seeing the signs. Chapter nine is entirely dedicated to the recovery of seeing for a man who was born not able to see. Jesus came to be seen! In the same first chapter, that same John the Baptist declares that he has seen and testifies that, “He is the Son of God.” Jn. 1-34 So the theme is set and meant to be seen throughout the Gospel.

All the “seeing” in the remainder of John’s Gospel leads to our Easter-Liturgy. Mary Magdala arrives and what she does see is not Jesus, but a visible fact, the stone guarding the tomb was rolled away.

One of John’s other key images is “light and dark,” “It was still dark” the reading tell us, whether out of fear, excitement, or uncertainty, or just as a news broadcaster, Mary runs to find help.

John, the “disciple whom Jesus loved” and Peter ran to the tomb. John got there first. Peter arrived second but was the first to come into the tomb. Here’s what they saw. Nothing! Emptiness except for the burial cloths. John “saw and believed.”  They did not understand but lived beyond that.

I have had the privilege of walking a journey with four people from our two parishes for over five months now. These four people were looking for something more meaningful in their lives. These four people were seeking understanding of our Catholic faith. Michael’s wife is Catholic, and he was interested in finding out more about our faith. Cortney has friends who talked about their faith, and it sparked an interest in her own life about God, faith, and the Catholic church, and where she might fit in. Philip’s wife’s family is Catholic, and he is raising his children Catholic but was never baptized himself and it began to make him question faith and he wanted to celebrate our faith with his family every Sunday and receive the Eucharist with them. Ben’s wife is Catholic, and while he himself was baptized he wasn’t catechized as a child and grew up not active in any faith tradition. But then we began to talk about the Catholic faith after I baptized his son, and he too began to seek an understanding to our faith. We have all gathered weekly and we have learned, laughed, told stories and they shared about how they feel God is calling them and leading them; and it made them seek even more. Part of their early study was to watch “The Search” on FORMED. If you have not seen it, I highly recommend it for anyone.

So, you see, this great Easter event celebrates that God has come very close, close enough to attract us. God has kept a safe distance, though, so to allow belief to be a free response to that closeness. Of course, we want “more please,” more tangibility, more of seeing. We like to be convinced as couples who are married. They want their love, their belief in their being loved, to be a heartfully-free response. Mary Magdala and her two seeking companions did not see what they wanted at the tomb; for what their hearts longed. Their Easter is so like our own these days of light, growth and still seeking all that we desire and hope for. Enjoy the not-seeing, enjoy the not being convinced and yet believing. In short, enjoy entering into the belief-seeing of Jesus’ early friends as they lived His Resurrection without their seeing.